I've just discovered an interesting alternative to PyQwt for plotting curves efficiently. That is Qt Charts, a module of Qt which exists at least since 2012 according to PyQtChart changelog (PyQtChart is a set of Python bindings for Qt Charts library).

Here is a simple example which is as efficient as PyQwt (and much more efficient than PythonQwt):
(the associated Python code is here) 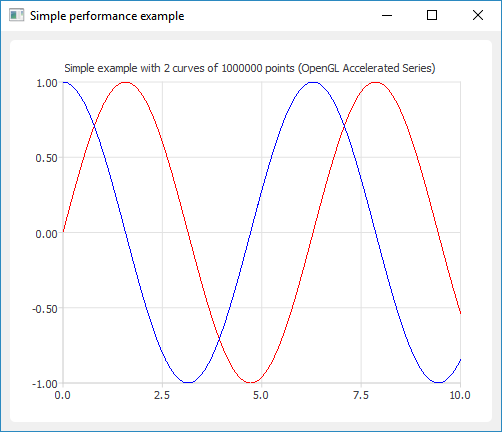 Posted by Pierre at 1:59 AM No comments:

On the behalf of Spyder's development team, I'm pleased to announce that Spyder 2.3.2 has been released and is available for Windows XP/Vista/7/8, GNU/Linux and MacOS X: https://bitbucket.org/spyder-ide/spyderlib/downloads

This release represents more than 2 months of development since 2.3.1 and introduces major enhancements and new features:

We fixed almost 40 bugs, merged 13 pull requests from 8 authors and added about 150 commits between these two releases.

This is a very important bugfix release which solves a lot of unicode problems in our consoles, the variable explorer and the main interface, so everyone is encouraged to update.

For a full list of fixes see our changelog
Posted by Carlos at 1:26 PM 3 comments:

On the behalf of Spyder's development team, I'm pleased to announce that Spyder 2.3 has been released and is available for Windows XP/Vista/7/8, GNU/Linux and MacOS X here: https://bitbucket.org/spyder-ide/spyderlib/downloads

This release represents 14 months of development since version 2.2 and introduces major enhancements and new features:

Spyder 2.2 has been a huge success (being downloaded more than 400,000 times!) and we hope 2.3 will be as successful as it. For that we fixed 70 important bugs, merged 30 pull requests from 11 authors and added almost 1000 commits between these two releases.

WinPython has its SourceForge project and everything is ready for downloads, discussions, bug reports and feature requests.

Spyder v2.1.14 is an experimental release of Spyder which I've been working on lately. Its purpose is to demonstrate the possibility for supporting both Python 2 and Python 3 with a single code base.

Great news: it works!
(and I must admit that it was quite easy and that it took me far less time than expected)

So now you may switch to Python 3 with Spyder at your side.
For example, Windows users may already start working with a full featured scientific Python ecosystem including Spyder thanks to WinPython v3.3 which first beta was released recently. WinPython is now supporting both 32bit and 64bit versions of both Python 2 and Python 3, and all this in a portable way. In other words, with WinPython, you may run four versions of Python on the same machine without any prior configuration and without any interference: fast switching from a Windows-integrated (Windows explorer/registry integration) Python version to another is even possible!

Note that even if  Spyder v2.1.14 supports Python 3, the forthcoming Spyder v2.2 release won't support it: Python 3 support will be officially implemented in Spyder v2.3 which will hopefully be released shortly after v2.2.
Posted by Pierre at 12:24 PM 7 comments:

As one of my image processing software (mainly based on NumPy, SciPy, guidata and guiqwt) is being limited by the "2GB per application" memory limit due to the fact that I'm using a 32bit build of Python on Windows, I'm currently thinking of switching to Python 64bit. That's why I've been recently investigating the 64bit/Windows/Python ecosystem.

According to experienced developers, there is no decent open-source (free) Fortran compiler for the Windows 64bit platform. As a consequence, it's impossible to build NumPy or SciPy on this platform using only free and open-source tools. That's why there is no official Windows 64bit binaries for these two libraries. The only ready-to-use installers available out there were prepared by Christoph Gohlke (using Intel Fortran compiler, a.k.a. 'ifort') and these are clearly unofficial binaries. Furthermore, Christoph has built two different installers for NumPy: one unoptimized and one optimized with the Intel Math Kernel Library (MKL), hence providing better performance. And Gohlke's SciPy 64bit binary package (the only one available freely online) require NumPy MKL. The problem is that, according to Christoph Gohlke, the MKL license does not allow me (or anyone else) to redistribute these binaries, unless I have purchased such a license. It is still unclear to me if the end user would also require this license too. Hopefully no. Let's assume that. Besides, after reading carefully the Intel MKL License terms, I'm quite sure that I can redistribute the MKL-based NumPy built because it's just runtime redistribution. So I think I will purchase an Intel Fortran Compiler license (including MKL) to be able to rebuild NumPy and SciPy in the near future but in the meantime I will just redistribute the packages built by Christoph Gohlke.

2. The distribution: how? when?

I'm planning on releasing publicly a completely free 64bit Python distribution by the end of 2012 (and I'll probably release a 32bit version too). To achieve this, I can't go on with Python(x,y): the concept has its limits and it's beginning to be difficult to maintain. So I'm thinking of something completely different: a portable Python distribution with a built-in package manager which would be able to install/uninstall Python packages to/from the distribution using standard Python installers (made with the standard Python library 'distutils') - support for eggs won't be added as I had very disappointing results with their unconventional way of installing packages, sometimes messing with the sys.path list. This portable distribution would also embed some useful tools like SciTE, WinMerge or TortoiseHg. But, unfortunately, as mentioned above (point 1.), there won't be any integrated C/C++/Fortran compiler in the 64bit edition (I'll probably integrate MinGW with gfortran in the 32bit edition of the distribution).

I've already done a bunch of tests and this is working great. I just have to take the time to write scripts automating the distribution creation process from scratch: installing the official Python distribution (.msi file) to a folder, install PyQt by unzipping the official NSIS installer, create the batch scripts for running Python (or Spyder) in the appropriate environment, and so on. My current portable distribution test is able to run Spyder with all basic scientific packages. That is very interesting: a complete and ready-to-use (without any installation requirement) scientific Python distribution on a USB key!


Update
This new project has now a name: this is WinPython. Check out the website for more informations.
Posted by Pierre at 7:05 AM 6 comments:

After a year of hard work on stability, performance and new features, Spyder v2.1 is now available for Windows XP/Vista/7, GNU/Linux and MacOS X.

We [the Spyder development team] are all very excited by this new release: Spyder is now becoming the [GUI-based] scientific development environment. Its future seems very promising. First there is the PySide support and the PyQt API v1/v2 support which were strategically essential (this will also help us supporting Python 3 in time). Second there is a cleaner and optimized code: this was critical for Spyder's behavior to be the closest possible to a standard Python interpreter. Third there is a very stable application: a lot of crashes and segmentation faults were fixed during the last year. Last, but not least, the future looks bright thanks to the new project members: we are now 5 committers and 6 contributors.

Help needed
More than ever, we welcome any contribution that helps making Spyder an efficient scientific development/computing environment. Join us to help creating your favourite environment!
Posted by Pierre at 4:10 AM 10 comments: